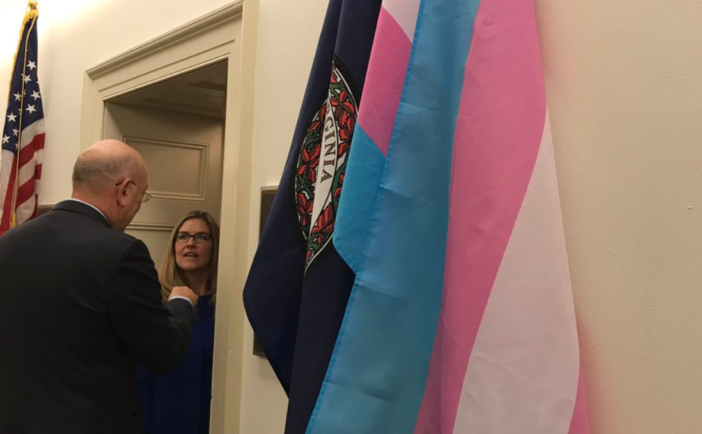 Democratic Virginia CongresswomanÂ Jennifer Wexton is starting off her term on the right foot. One of her first orders of business was to hang a trans flag outsider her office door.

Wexton, who is the aunt of a transgender child, is the first Congressperson to hang the flag.

â€śThe trans community has been under attack,â€ťÂ Wexton told theÂ Washingtonian.Â â€śI wanted to show my solidarity because we are talking about my friends and family.â€ť

The freshman legislator was endorsed by the Human Rights Campaign. She defeated incumbent Barbara Comstock who had a mixed record on LGBTQ issues. While generally unsupportive, she voted against an amendment that would have banned transgender people from the military.

â€śCongresswoman Comstockâ€™s vote on this issue reflected her view that [Defense] Secretary [Jim] Mattis, and the professionals at the Defense Department are best equipped to define these policies,â€ť her spokesman, Jeff Marschner, said in a statement at the time. â€śThe congresswoman trusts that Secretary Mattis will provide the clarity and details on what is in the best interest of military readiness going forward.â€ť

President Trump later tweeted his unilateral decision to ban trans people from military service. Secretary Mattis later testified that that none of the four military servicesâ€™ top generals nor the chairman of the Joint Chiefs of Staff were consulted before Trump randomly announced his decision on social media.

â€śFrom the military to schools to hospitals, the Trump-Pence White House is working overtime in an attempt to erase trans people from the public square,â€ť Human Rights Campaign spokesperson Charlotte Clymer said.

â€śThe trans flag proudly on display in the Halls of Congress is a sign to our community that we will not be erased.â€ť