The pink triangle, (German: Rosa Winkel), was sewn onto the clothes by the Nazis before and during World War II (1939-45) to identify male prisoners in concentration camps who were sent there because of their homosexuality. Every prisoner had to wear a triangle on his or her jacket, the color of which was to categorize him or her according "to his kind." Jews had to wear the yellow badge, and "anti-social individuals" (which included vagrants, "work shy" individuals and often, but not exclusively, lesbians), the black triangle.

The prisoners with a pink triangle identified themselves as gay (sometimes they were married to women, and engaged in very few, if any, homosexual acts). Not everyone convicted under Paragraph 175 was sent to a concentration camp; in fact, most were sent to ordinary jails. Most gay men who suffered and died in Nazi concentration camps actually wore the yellow star (because they were both Gay and Jewish). As such, it is difficult to construct a coherent gay victim group and count its numbers.

While the number of homosexuals in concentration camps is hard to estimate, Richard Plant gives a rough estimate of the number of men convicted for homosexuality "between 1933 to 1944 at between 50,000 and 63,000." The pink triangle was first used as a symbol of resistance and solidarity in the early 1970's. In 1975 it became the emblem of the Coalition of Conscience study group of the New York Civil Liberties Union. Starting in 1986, HIV-AIDS activists captioned the triangle with the words "Silence = Death." In 1987, the radical HIV-AIDS campaigning group ACTUP adopted the slogan, but inverted the triangle so that it pointed upward.

The inverted pink triangle has become an international symbol of gay pride and the gay rights movement, and is second in popularity only to the rainbow flag.

The black triangle was a badge used in Nazi concentration camps to mark those who were "asocial" or "work shy". It was later adopted as a lesbian or feminist symbol of pride and solidarity.

The labrys is a double-headed axe, found in many parts of the pre-patriarchal world, originally from Crete, and is one of the oldest symbols of Greek civilization. It was commonly associated with goddesses, and more recently has been adopted by lesbians.

The "purple hand" was an early symbol of the gay liberation movement and an effort to show resilience in the face of anti-gay attacks. The term originates from Oct 31st 1969 when activists protested the San Francisco Examiner's series of anti-gay articles by protesting in front of the building. Employees of the newspaper dumped purple ink on the peaceful protesters. The activists used the ink to draw slogans on the building and to make a visible mark of gay uprising.

For a complete history of the flag, please Click Here.

The lowercase of the 11th letter of the Greek alphabet carries several meanings. First of all, it represents scales, and thus balance.

The Greeks considered balance to be the constant adjustment necessary to keep opposing forces from overcoming each other. The hook at the bottom of the right leg of the lambda represents the action required to reach and maintain a balance.

To the Spartans, the lambda meant unity. They felt that society should never infringe on anyone's individuality and freedom.

The Romans adopted the letter to represent "the light of knowledge shed into the darkness of ignorance."

Finally, in physics the symbol designates an energy change.

Thus the lambda, with all its meanings, is an especially apt symbol for the gay liberation movement, which energetically seeks a balance in society and which strives through enlightenment to secure equal rights for homosexual people.

It was chosen as the symbol of gay liberation by the Gay Activist Alliance (GAA) of New York in 1970 after the Stonewall Riots.

In 1974 lambda was adopted as the international symbol for lesbian and gay rights by the International Gay Rights Congress meeting in Edinburgh, Scotland.

Because of its militant associations, the lambda symbol has spread throughout the world. It sometimes appears in the form of an amulet hung round the neck as a subtle sign of recognition which can pass among unknowing heterosexuals as a mere ornament. Such emblems may reflect a tendency among homosexuals toward tribalization as a distinct segment of society, one conceived as a quasi-ethnic group. 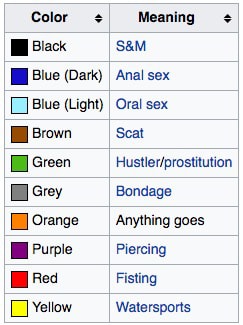 This table is drawn from Larry Townsend's The Leatherman's Handbook II (the 1983 second edition; the 1972 first edition did not include this list) and is generally considered authoritative. Implicit in this list is the concept of right/left polarity, left as usual indicating the top, dominant, or active partner; right the bottom, submissive, or passive partner. Negotiation with a prospective partner remains important because, as Townsend noted, people may wear hankies of any color "only because the idea of the hankie turns them on" or "may not even know what it means".