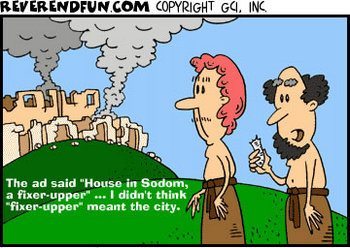 We all know about Sodom. People who've never picked up a Bible have used the story of Sodom and its fiery demise as condemnation against homosexuality and here's just one example from an email I received from someone who had a less than favorable view of homosexuality:

"There is a story in the bible, i would find it if i had the time, but it talks about this really sinful city. I believe it was around Abraham's time. God talks about how he turned his back on these people because of their wicked sins. One of the sins He talks about is homosexuality."

"One of the sins He (God) talks about is homosexuality."

Nope. God never talks about homosexuality or same-sex anything in reference to Sodom. The story of Sodom as evidence of the biblical witness against homosexuality has been dismissed by many scholars and theologians, including those who hold a non-affirming stance, as a straw dog, an argument that's easy to disprove. And yet there are still those who come wielding the story like it's the smoking gun. This is it. Sodom. Sodomites. Fire and brimstone. Case closed.

And maybe that's what you've heard all your life and after years of having the Sodom-Homosexuality connection repeated over and over it can be really hard to believe any other possibility, but I'm going to ask you to try, try to imagine at least until the end of this page and see if anything you read here makes you wonder about the certainty of it all.

When homosexuality is named as the sin, or one of the sins, of Sodom, that's a claim that's staked on something other than what's actually written in the Bible about the place because throughout both the Testaments there's an abundance of references to Sodom's sin and none of them imply or specifically tag homosexuality as one of them. The sin(s) of Sodom provided in the biblical text are:

* Cruelty, failure to care for the young and poor - Lamentations 4:3-6

There are four other mentions of Sodom in the New Testament by Jesus. Three times Jesus referred to the city within the context of inhospitality (more on this in a minute) and another time Jesus compared the suddenness of the coming of the Kingdom of God with the suddenness of the judgment that befell the time in the time of Noah and the land of Sodom. In all three passages Jesus says nothing about the exact nature of Sodom's sin.Wouldn't you think that if the sin, or even one of the sins of Sodom had been homosexuality that it would have appeared somewhere in the Bible. Just a little side mention even?

Let's go back to the story in Genesis 19 where we have Lot, standing at the gate, welcomes the two strangers, leading them through the defensive walls of the city and into the safe haven of his home. Having not been born in Sodom, Lot is considered an outsider himself so the men of Sodom, wary not only of these two strangers but of Lot, gather outside Lot's house demanding that the strangers be sent out to them so they could have sex with them. Because the angry mob consisting of every male citizen of Sodom were all queer? With women and children included among the inhabitants, hardly. The crowd wasn't comprised of gay men or straight men on the low-down. Sex for the sake of sex had nothing to do with what these men intended to do. Their intention was to let these strangers who had come into their city know exactly who was charge and so they sought to perpetrate a violent gang rape on them and put them in their place. This sounds like extreme behavior at first but not really. We hear about the same thing happening in prisons in our contemporary culture. The long-term inmates want to let the new boys know who holds the power. In antiquity the conquering armies frequently raped their defeated opponent as a sign of total supremacy, and rape, whether perpetrated against another man or a woman was then, as it is today, about power, not sex.

So what was Sodom's sin if not homosexuality? Along with the other sins mentioned, the sin suggested both in Genesis 19 and in Jesus' references to Sodom would be inhospitality. It's hard to understand how inhospitality could be viewed with such contempt when in our current context, hospitality means setting out the hand towels that actually match the bathroom decor and putting dinner on the dining room table rather than on folding trays in front of the television. It means saying to a guest, "Our home is your home" and meaning it. It's a warm welcome. In our world hospitality means being gracious and cordial to a visitor who enters our home but the same was not the case in antiquity. In a country where cities and villages were separated by the harsh desert, hospitality was life-giving to the one on a journey passing through. It was more than good manners; it was a matter of life and death, and to show hospitality to a stranger was considered a sacred obligation.

As was mentioned earlier, when Jesus referred to Sodom it was within the context of inhospitality. In both Luke 10 and Matthew 10 Jesus warns that a worse fate awaits those villages that don't welcome his disciples than the fate that came to the lands of Sodom and Gomorrah. In a similar manner Matthew 11 tells of an occasion when Jesus compares the judgment that Sodom receives to those who don't receive his miracles or the words of John the Baptist. When comparisons are made, they're made between similar things and so it would be like comparing apples to oranges were Jesus to have compared the punishment coming to those who were inhospitable to his followers as to what came to the inhabitants of Sodom as a result of their sexual sin.

Previous: 02. Adam and Eve and Steve: Genesis 1 and 2
Return to: 01. Homosexuality and the Bible Summary

¬©2010 Anita Cadonau-Huseby. All rights reserved.
Used with Permission and Much Gratitude