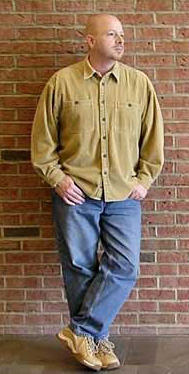 RALEIGH - Ray Vester was raised in a Pentacostal Christian home in Rocky Mount, N.C. It was there that he developed a devotion to the music and teachings of the Christian religion.

At the age of 19, he recorded his first record, "Come Soon Jesus," which was released in 1979 and subsequently re-recorded by several other groups. In the years that followed, Vester found success with various gospel groups: The Faith in Action Singers, The King's Messengers and The Gospel Laymen.

The Gospel Laymen recorded two albums during the three years they were together.

In 1985 Ray joined yet another gospel group, The Monarchs. Although he wrote and recorded "This Man from Galilee" on the group's "Naturally" album, which garnered major airplay on multiple gospel stations on the east coast, the effort would be his last for nearly 18 years.

Now he's back on the scene again, preaching and singing the message of his beliefs across the United States and Canada. But where has he been all this time?
"I guess you could say I turned away from the church," says Vester. "I came out in 1986, and at the time I wasn't able to reconcile my sexual orientation with my spiritual beliefs."

Vester faced a barrage of issues when he decided to come out. It meant the end of a five-year marriage to a woman, and it proved to be a challenge for his immediate family members.

"My father and mother were ministers," Vester recalls. "It was a difficult time, but they eventually came around. My dad never really had too much of an issue with it. He only took issue with what the Christian teachings said about it. But as a person he wanted me to be happy.

"My mom, though, had huge issues. It was extremely difficult for her. But I've always been a mama's boy and she finally came to terms with it."

Vester would leave Rocky Mount in 1987, moving to Sanford, N.C. and Nashville before finally settling in Raleigh in 1995.

Of the years spent in between leaving the church and returning to his Pentacostal roots, Vester says this: "I stopped going to church, because I felt there was no way you could be a Christian and be openly gay. I was going to the clubs, drinking. For most of those years I tried to put my faith on the back burner. That calling for ministering through music never went away. I wanted to be in church, but I never felt it would be accepted as a whole."

It was 2002 when Vester finally came to accept himself as both gay and Christian.

The years spent soul-searching opened Vester's eyes to many things in the world.

"I think we grow in our Christian walk and learn," says Vester. "For Ray Vester, Christianity is the way. For other people it may be Islam, Buddshism or Hinduism. I think it's a personal thing. There are many paths that people can take. I do beleive that Jesus is the son of God, but if someone else does not feel that way, it's not for me to judge. Over the years I've learned a lot. I'm a lot more open to all kinds of people."

Since 2002 Vester has released a total of five CDs. His latest, released this past January and titled "Freedom," is a collection of traditional hymns.

Now 47, Vester today spreads his message in only affirming venues and looks forward to many more years of touring.

He's also looking for LGBT Christians who are interested in joining his "From The Heart Club." For $20 a month members of the "From the Heart Club" will receive a copy of Vester's newest CD "Freedom" and when he releases a new CD, members will automatically get a copy mailed directly to them. For more information on supporting Vester's LGBT musical ministry outreach visit his website at www.rayvester.com.