May 21, 2017 - Scotland is moving towards being the country in the UK with most liberal Christian practice on gay marriage with the Church of Scotland and the Scottish Episcopal Church both taking steps in this direction in the near future.

On Thursday the Church of Scotland is expected to back same-sex marriage in a debate on how such weddings could take place in church.

A report on the issue to the General Assembly which is meeting this week invited the church to take stock of its history of discrimination against gay people and to apologise 'individually and corporately'.

Moderator Designate the Reverend Dr Derek Browning said: 'On Thursday afternoon the theological forum will be bringing a report to the General Assembly, and this year what they're asking to do is for the assembly, first of all, to consider making an apology to the gay community for things that have have been said in the past and the assembly will have to make up its mind on that.

Equalities campaigner Jayne Ozanne told Christian Today: 'I want to congratulate my Christian brothers and sisters north of the border for courageous and compassionate steps towards enabling those who wish to perform same-sex marriages to be able to do so. Key to this is the honest recognition that there are different ways of interpreting scripture on this important matter. I look forward to the day when we here in the Church of England will be able to do the same.'

Meanwhile the Princess Royal has addressed the General Assembly of the Church of Scotland, where she is serving as Lord High Commissioner representing the Queen.

Princess Anne praised the General Assembly as a place for 'reasoned and civilised debate'. She said the numbers worshipping in church may be falling, but there is still a need for spiritual leadership. She said this need is 'greater than ever.'

Princess Anne said churches have 'a major role to play in welcoming strangers', a tradition she said is 'stronger in Scotland than in many other parts of the world'. 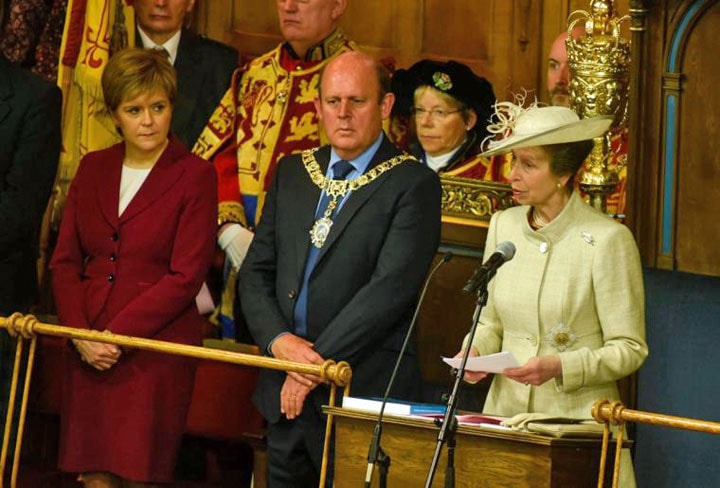 The Church of Scotland will vote on gay marriage in the wake of a decision by the Scottish Episcopal Church last year to ask its seven dioceses to debate changing Canon law governing marriage. The issue will return to synod next month.

The church is expected to approve the change in doctrine sent to the dioceses last year to remove the stipulation that marriage is between a man and a woman.

Those who do not wish to conduct a same-sex marriage will be able to opt out via a conscience clause.

Same sex marriage has been legal in Scotland since the end of 2014 but as in England, most churches at present do not conduct them.

If passed it would mean the Scottish Episcopal Church becomes the first main Christian denomination in Britain to agree to marry gay and lesbian couples, and will add to the strains currently dividing the worldwide Anglican Communion.

Earlier this year, Bishop David Chillingworth, outgoing Primus of the Scottish Episcopal Church, said: 'The outcome of the synodical process which will take place in June is not a foregone conclusion. The voices of clergy and lay people from across Scotland will be heard both in debate and in the voting process. The Scottish Episcopal Church is working closely with those who find this proposal difficult to accept. Whatever the outcome may be, it is our intention to be and to remain a church which honours diversity.'