Part 1 and Part 2 if you missed them

Skip the witty lead-in.
Pass on the relevant but lengthy personal anecdote.
Don't bother with an introduction that ends up longer than the actual post.
For once would you just get to the point. These people have other things to do, you know.

Memo back to Self:

I've been telling you for the last week that I don't believe in the concept of eternal damnation, fire and brimstone, or that anyone will spend all eternity in perpetual time-out for their sins, so now seems a good time to take that a little further as to how believing all that impacts how I believe about sin, salvation, and Jesus as Savior.
Sin. Salvation. Savior.

Here is me stating the obvious: as long as children die of starvation in a world where others live in abundance, as long as anyone hates another, as long as even one living being is treated with indignity, until everyone is valued equally, and until all oppression and violence is wiped from the face of the earth, any arguments about our enormous capacity for sin seem unnecessary. Call it spiritual brokenness, the actions of a wounded soul, wrongdoing, transgression, sin, it makes no never mind. These things that we do, by whatever name we call them unleash injury on others, damage ourselves, and grieve the heart of a God who desires so much more for His creation.

Christian teaching refers to the presence of sin that covers our world as original sin, the idea being that the most holy, righteous and adorable among us are sinners to the core. Adam and Eve sunk their teeth into a crispy morsel of forbidden fruit and at that moment humanity was sunk, so that on all our human resumes were stamped the words, fallen being and the only means by which that label could ever be replaced with new creation would be through the salvific work of Jesus on the cross. 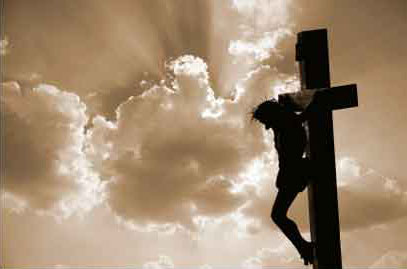 In Christ's death on the cross, sin and salvation collided and in that moment something so extraordinary took place that we've spent our lives as the church trying to make sense of it all, yet despite the best formulated ruminations of theologians and doctrinal decrees, we've hardly scratched the surface of all the mystery held in that one eventful day that unfolded in the course of human history. Even so, we can't leave it alone. We keep coming back and trying to unravel more and more of it because we're drawn to the cross like moths to a flame. And what a radiant flame it is.

Christ's atoning work on the cross, the way of salvation provided, is understood and described in a variety of ways within the Christian tradition, each providing a different angle on what salvation and Jesus' role as our Savior means. Two of the more familiar theories, and ones that many of us in the church tend to overlap and meld together are the ransom theory and the theory of satisfaction.

Ransom Atonement
Mark 10:45 tells us that "Jesus came to be a ransom for many," which I understand to mean that we were under the control of sin; in essence sin had taken us from God and now we were owned by sin. So that we might be returned and reconciled to God, Jesus paid the ultimate price as a ransom that bought us back. In this way we doubly belong to God; both in that we were born of God and were then bought back by God.

Satisfaction Atonement
In Romans 6:23 Paul warns that "the wages of sin are death." In our sinful condition we have dishonored God as His creation, and having caused such damage to all humankind through our sin God requires that a penalty be paid. We owe a debt for the wrong we've done but the only way to satisfy such a debt must come through the offering of a perfect sacrifice. The irony and poignancy of the story is that it is God alone who can provide the debt that must be paid, that being through the gift of Jesus, who as fully God and fully man can be the only true and perfect sacrifice.

This is atonement as I understood it for much of my life but in time I found them to be problematic in that both of these theories portrayed God in a way that doesn't ring true for me by offering the image of a God who demands human sacrifice and the literal shedding of blood to move him to forgive sin. The gods of mythology and religious cults predating Christianity demanded human sacrifice but then they were vindictive gods, temperamental, arbitrarily ticked off by humankind, cruel and at times little more than a ramped up version of the neighborhood bully. None of them were the God who is Love. None of these were the God of whom Jesus proclaimed; the God who is a loving shepherd, a widow searching for her lost coin, a mother hen who guards her children, a father rushing to the side of his wayward son, a creator who feeds the birds of the air and clothes the flowers of the field.

Let me be clear about something. At the moment of Jesus' death, I unequivocally believe the earth and all creation were changed to the core in a way that best be described as supernatural mystery. Even though I don't believe the spilling of blood was required by God, it's still true for me to to say that Jesus brought salvation for all and everyone. The Savior of the world had come and through him God's saving presence entered our dusty little planet and washed over it like a tsunami in an arid desert. I kid you not. The world the second after Jesus died was a completely different world than it had been only one second before. The veil was torn in half. The death of Jesus broke through the darkness and three days later Jesus' resurrection brought forth new life and the end of all hopelessness and for this one stone in the wall of my faith I'd take a bullet.

I'm so failing here at saying what I want to say and never will be able to say. I have no words nor voice to speak of it. Not in a way that's worthy of it. Okay, continuing on.

Listen, as much as I believe that something utterly glorious and mysteriously divine happened on the cross that altered this world as we know it and set us free from a destiny never meant for us, I no longer believe that God sent Jesus to die. God didn't demand someone die for us. God purposed that someone live for us. The Son of God was sent to embody and reveal the true nature of God. Not the God of law and retribution. Not the God who slayed all who opposed the children of Israel. Not the God who demanded sacrifice. Jesus came to bring the Good News and the Good News was that we had it all wrong; God was loving, compassionate, and of tender mercy. A God of holiness who could be touched by the unclean and not be defiled. A sinless and pure God who could break bread at the table with the sinner and unclean. A God of judgment who was swift in bringing justice to the oppressed. A righteous God who was quick to humble the self-righteous. God sent Jesus to demonstrate his love for us and the demonstration of that love was so great, colliding so fiercely against the God who was portrayed by the religious leaders of the day that Jesus was killed for it. He was murdered on the cross for speaking and living out the love of God and refusing to back down, refusing to shut up, and refusing to stop rattling the temple doors.

So what does the cross mean to me? Oh, it means everything. Salvation entered the world that God knew from its very foundation was his intention to provide, not through Jesus' death but through his living and his dying. In the cross Christ demonstrated the extent of God's love for us, not that he was destined to die, but that he would choose regardless of the certainty of death to proclaim the Good News, eat with the sinner, touch the unclean, free the captive, and give sight to the blind even on the Sabbath. In this demonstration of giving up his life for us humankind responds and is transformed. We see there is a different way to live. There is another option for us beyond sin and self. In Jesus' witness of forgiveness for what he suffered on the cross we have the model to forgive and be forgiven so we can be set free to love.

I realize I'm not inventing a new view of the cross. It's an old one that's been around for a really long time and a position in which many liberal theologians place themselves. Originally it was known as a healing view of the cross; by our witness to the events of the cross we are healed from the wounds and brokenness of humanity. Rene Girard called it the mimetic desire theory in that we are compelled by Christ's example to imitate him. A more recent theological position knows it as the theory of moral influence, that Jesus' example influences us toward moral living, but before I knew that others had boxed it up and labeled it something, I just knew that for me the cross was transforming, altering the world and re-shaping how I could live if left to my own devices.

Jesus is my Savior beyond one single great act of salvation two thousand years about but every single day of my life, hour by hour, minute by minute. God's love spared me from an eternity in hell, and Jesus saves me from myself every time I'm confronted with a choice to hate or to love, to retaliate or to forgive, to grab or to give. Every time I look toward the life of Jesus I'm challenged to live in the way Jesus modeled empowered by the Holy Spirit. When I think of the cross and remember Jesus' forgiveness for the robber at his side and the soldiers at his feet the way is set for me to receive God's forgiveness and extend forgiveness to others, including myself. That is the power of the cross.

Jesus saved me and is saving me.
And I am and forever will be in his debt.
Thank you.

After all I've said I know that those who scratched their heads and flipped their Bibles over my view of hell (and the lack there of) are still scratching and flipping more than ever. And that's okay. This is my faith. My relationship with God. My human understanding of the divine Creator, the loving Savior, and the eternal Spirit. I shoot, I score, and sometimes I miss. Like you I'm just trying the best I can to live as faithfully as I can to what I best understand. It works for me.

This article was originally posted on SisterFriends Together
Â©2010 Anita Cadonau-Huseby. All rights reserved.
Used with Permission and Much Gratitude

Anita Cadonau-Huseby was the Founder and Administrator of ChristianLesbians.com, which is no longer active. She has spent nearly 30 years in pastoral ministry.

Note from Mary: When I was first struggling with my sexuality and my faith, I found Christian Lesbians. Anita's leadership and her delightful sense of humour made my journey easier. It was so good to know I was not the only one. I will forever be in her debt.