I am blessed to live in Canada where gay marriage has been legal for many years. I am further blessed that gay marriage was just the beginning, and now I am seeing advancements taking place in our elementary and secondary school systems to actively teach both staff and students about the respect that every individual and family deserves.

Literature has been compiled and laws have been passed to assure a healthy society which respects diversity of all kinds.

Embracing diversity and moving beyond tolerance to acceptance and respect will help us reach our goal of making Ontario's education system the most inclusive in the world. We believe - and research confirms - that students who feel welcome and accepted in their schools are more likely to succeed academically. We believe that everyone in our publicly funded education system - regardless of background or personal circumstances - must be welcomed and accepted, and thereby enabled to reach their highest potential. 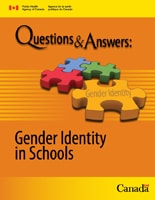 The term 'gender' was first used in the 1950s to differentiate the set of feelings and behaviours that identify a person as 'male' or 'female', from their anatomical 'sex' which is determined by their chromosomes and genitals. 'Gender' is now understood as the roles and relationships, personality traits, attitudes, behaviours, values, relative power and influence that is attributed to males and females by society. Gender is one of the most basic elements of human identity.

In 1996, the Canadian Human Rights Act formally included "sexual orientation" among the prohibited grounds of discrimination and in 2009, Canada marked the 40th anniversary of the decriminalization of homosexual activity in Canadian law and legislation. Lesbian, gay, and bisexual individuals (collectively, sexual minorities) now have the same rights and responsibilities as all Canadian citizens.

Library Books - A list of books which are now included in all Durham District School Board school libraries, including books for both Elementary and Secondary Schools on Sexual Orientation, Physical/Mental Ability, Gender Equality and Socioeconomic.