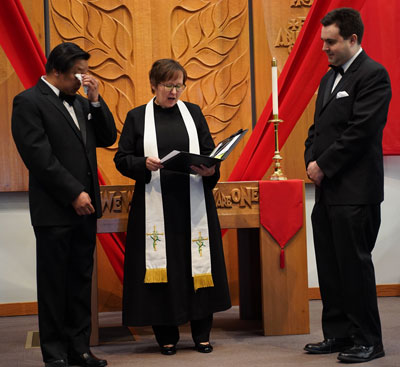 I am writing about our gay son, Johnathan's journey to marriage, to bring hope, faith, courage, and patience to others who are lonely and frustrated along the path.

Johnathan has Autism, specifically, Asperger's Syndrome. He is high-functioning and has his bachelor's degree. He has worked for Nintendo, Pokeman, and Microsoft for years as a video game tester. He loves Scrabble, chess, and math, and is very good at them, but his handicaps have given him many challenges.

He had stuttering problems as a child and seemed to be in his own little world. He was a sweet child but often did not fit in with the other kids. He has health issues, and social problems that made relationships very difficult.

He found people (both guys and girls) could be very cruel when trying to date, and would make fun of him. There were those who tried to help him, even though they did not feel compatible with him as dating partners.

As a mom I often worried about him. I worried when I found out he was gay, and even wrote a book, Prayers for Johnathan, in 2000.

I worried whether he could live on his own, finish college, and keep a job. I worried when he lost his faith in God, and became suicidal. I worried if he would catch some disease, get beaten up, or ever find a life partner. 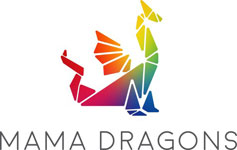 Mission: We support, educate, and empower mothers of LGBTQ children

Vision:┬ĀA world where all mothers fiercely love and advocate for their LGBTQ children

Mama Dragons has grown from a handful of mothers to a membership numbering close to 3,000.

This is an unusual ally group. We exist to offer support for one another and for our LGBT loved ones.

Our roots are in Mormonism but we are now inclusive of all faiths, or lack of faith traditions. There is no expectation or requirement of involvement or activity in religion, and there is great understanding about the disconnect many feel concerning that.

ŌĆ£Being a member of Mama Dragons means that as I navigate this life with my transgender son, whom I love with all my heart, I have the support and friendship of women who have traveled this road before me, and who help and support me when I need it the most.ŌĆØ┬Ā ┬Ā ┬Ā~ Tina ŌĆō California

Depression remains one of the most pressing issues in the country, and one of the most overlooked. According to the National Institute of Mental Health, at least 16.2 million people in the US suffered at least one episode of depression. Women are more prone to be depressed than males, or at least double the rate (8.5% against the 4.8%, respectively). Adults between ages 18 and 25 have the highest rate of depression.

While societyŌĆÖs treatment of the LGBT community has improved over the years, thereŌĆÖs no denying that the stigma, bullying and the harassment are still there. For instance, more and more people now support same-sex marriage. In 1977, only 43% believed that gay and lesbians should be in a legal relationship. That number rose to 66% in 2015.

Of course, back then society had a backward view of what homosexuality is. In fact, the Diagnostic and Statistical Manual of Mental Disorders published by the American Psychiatric Association defined homosexuality as a perversion or abnormality. The exact term was ŌĆ£sociopathic personality disturbance.ŌĆØ The implication was that itŌĆÖs a disorder that can be cured.

Read moreThe LGBT Community and Depression: What Can Parents Do?

Click Here To View Articles With A Short Introduction

1) Suicide is the third leading cause of death among 15 to 24 year-olds.

2) Suicide is the second leading cause of death on college campuses.

3) More than one third of LGB youth report having made a suicide attempt.

4) Nearly half of transgender youth have thought seriously about suicide, and one quarter have attempted it.

5) Young gays are two to three times more likely than their straight peers to attempt suicide, according to the Journal of the American Medical Association.

6) The American Counseling Association reports that nearly a third drop out of school, largely because of harassment related to their sexual orientation.

Secretly, many parents hope not. But if the answer is yes, there's a lot of support to help you and your child along the journey.

A few weeks before writing this, I bumped into an acquaintance, a middle-aged woman with two teenage sons. I told her I was working on an article about parents of teens who might be gay. "I'm not sure I'd want to read the article," she said quickly. It surprised me that this liberal-with-a-capital-L woman would display such discomfort at the topic. In the following weeks I'd learn, from parents of gay children across the country, that her reaction wasn't unusual.

"I had absolutely no problem with other kids being gay, just not my own child," one mother of a gay teen told me. "I hoped that if I ignored the signs, it would just go away," said another.

Read moreCould Your Teenager Be Gay?

My Kid Is Gay┬Ā is a first-of-its-kind digital presence, inclusive of videos, advice, and resources, dedicated exclusively toward helping parents understand their Lesbian, Gay, Bisexual, Transgender, Queer, Intersex, and Asexual children. My Kid Is Gay sources voices from across the world to help answer the many questions that parents (and family members, and even teachers!) have about the LGBTQIA young people in their life, including advice from parents, youth, and experts on a variety of topics related to sexuality and gender identity.

Co-Founders Kristin Russo and Dannielle Owens-Reid are also the authors of This is a Book for Parents of Gay Kids (Chronicle Books), which is a question & answer guide for parents whose kids have recently come out to them!

Wondering on our use of the word ŌĆ£gayŌĆØ? Read more about it here!
Have a question for one of our writers? You can submit it here!

Note from Mary: This is an EXCELLENT Resource website. I recommend it!

Be patient, not only with her, but with yourselves as parents. ItŌĆÖs OK to be upset, concerned, frightened, and worried about the ŌĆśeternal consequencesŌĆÖ of what is happening to your family. Some of your brightest hopes and dreams for your child will need to be adjusted if you are to remain close to her. But really, all those hopes and dreams boil down to this: you want your daughter to have a happy, fulfilling life. And trust those of us who knowŌĆ” she really can. I think the chances of that increase greatly when we accept our true nature and then make the most of what we have been given.

What to do you do if your child is gay?

"On December 17, 1997, when our son Adam told us he was gay, our world was turned upside down. We were absolutely devastated. We desperately needed someone to comfort us, to assure us that our son, our family would be okay. But we were too embarrassed and scared to admit this secret to anyone, to reach out for comfort."

This excellent website is a "must visit" for all parents of gay children!

Family Acceptance Project┬ĀŌĆō is the only community research, intervention, education and policy initiative that works to decrease major health and related risks for lesbian, gay, bisexual and transgender (LGBT) youth, such as suicide, substance abuse, HIV and homelessness ŌĆō in the context of their families. We use a research-based, culturally grounded approach to help ethnically, socially and religiously diverse families decrease rejection and increase support for their LGBT children.

Our team is putting research into practice by developing the first evidence-based family model of wellness, prevention and care to strengthen families and promote positive development and healthy futures for LGBT children and youth. Once developed, we will disseminate our model across the U.S. and to groups we work with in other countries.

The psychologists in the film give four concrete suggestions for parents. They used the mnemonic LEAD for:

Express your pain away from your child.

Do good before you feel good.

Click Here to take a 5 minute survey and to see the whole film on their website. The survey is completely anonymous and requires no identifying information, and allows you to omit questions you prefer not to answer.

The movie runs for 35 minutes (well worth the time).

This is a 39 page downloadable book by a Pentecostal Minister and mother of a born again lesbian daughter who came out when she was 18, and is now 35.

Her daughter inspired her through her testimony and walk with God that anyone can be GLBTIQ and also a chosen child of God.

April 11, 2018 - In a recent study, researchers found that the risk of depression and suicide in transgender youths falls when they are allowed to use their chosen name.┬Ā

AUSTIN, Texas ŌĆō In one of the largest and most diverse studies of transgender youths to date, researchers led by a team at The University of Texas at Austin have found that when transgender youths are allowed to use their chosen name in places such as work, school and at home, their risk of depression and suicide drops.┬Ā ┬Ā

I am blessed to live in Canada where gay marriage has been legal for many years. I am further blessed that gay marriage was just the beginning, and now I am seeing advancements taking place in our elementary and secondary school systems to actively teach both staff and students about the respect that every individual and family deserves.

Literature has been compiled and laws have been passed to assure a healthy society which respects diversity of all kinds.

Embracing diversity and moving beyond tolerance to acceptance and respect will help us reach our goal of making Ontario's education system the most inclusive in the world. We believe - and research confirms - that students who feel welcome and accepted in their schools are more likely to succeed academically. We believe that everyone in our publicly funded education system - regardless of background or personal circumstances - must be welcomed and accepted, and thereby enabled to reach their highest potential.

This article is the result of a letter to a dear man who requested counseling about the fact that his father will not accept his homosexuality, even after 30 years. His father has told him that he can't be Christian if he is gay. Since this is such a universal problem for us all, I decided to print my response to him, in the hopes that it may help others.

First, there is no way that you are going to change your father's mind about homosexuality. Only the Holy Spirit can do that, so stop trying. Instead, accept that he doesn't accept you, as hard as that is, and then change YOU. I'm not talking about changing your orientation of course. I'm talking about changing your attitude about needing your father's acceptance. We all want to be accepted by our parents, but sometimes that just doesn't happen, so we need to live our lives in the reality of today, not in the hope that someone else will change in the future.