Are we finally willing to tell the truth about her life and work on her 200th birthday? 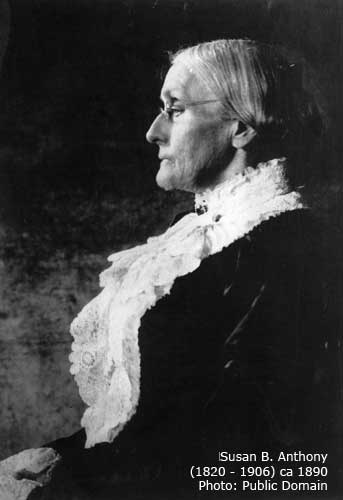 Susan B. Anthony was born 200 years ago in a country where few women or people of color dared to give political speeches on public platforms and that had no national voting rights for women. Both straight and queer women were often pressured into marriage when it was against their wishes. Women who did manage to remain single â€“ or who formed partnerships with other women â€“ were typically pitied or scorned.

She worked tirelessly for most of her long life to demand racial and gender equality and her lesbian attractions only fueled her struggle against the patriarchal system she abhorred.

Anthony was the mastermind â€“ more than a hundred years before ACT UP â€“ of a protest that had women storming polling places during the 1872 presidential election to insist they be allowed to vote. After the Civil War, African-American men had been granted the national right to vote to the exclusion of women.

Anthony never married or had a serious relationship with a man. As a teenager, she prophetically confessed to her diary, in 1838, â€śI think any female would rather live and die an old maid.â€ť

She continued to make pronouncements that coyly hinted at her lesbian orientation. In an 1896 interview, she told the reporter, â€śI was very well as I wasâ€¦Iâ€™m sure no man could have made me any happier than I have been.â€ť

When pressed by journalists, throughout her long life in the media spotlight, she stagecrafted a role for herself of not being able to find the right man. But the real reason she remained â€śsingleâ€ť was that her amorous desires and emotional needs were only fulfilled by women.

The youthful lesbian orator Anna Dickinson, hailed as â€śAmericaâ€™s Joan of Arcâ€ť during the Civil War for rallying the war-weary Union forces to victory with her fiery speeches, became the target of Anthonyâ€™s affections in the 1860s. Dickinson was catapulted to national fame as the first woman to give a full-length political speech before Congress and her motto, which appeared on some of her publicity photos, was â€śThe World belongs to those whoÂ takeÂ it.â€ť

â€ťI invite you to comeÂ to meÂ here and sleep with me in my fourth story bed room at Mrs. Stantonâ€™s ever so many nights,â€ť she wrote.â€ť To snuggle you darling closer than ever.â€ť

Anthonyâ€™s feelings of sensual anticipation reveal a woman who is very much flesh and blood. â€śDear Dicky Darlingâ€¦I haveÂ plain quartersâ€¦double bedÂ â€“ and big enough & good enough to take you in. I do so long for the scolding & pinched ears & every thing I know awaits me.â€ť

The relationship cooled off by the early 1870s. Dickinson would go on to have a series of girlfriends over the years and finally settled into a 30+ year relationship with a married woman, Sallie Ackley. The rather bemused Mr. Ackley didnâ€™t seem to mind the living arrangement.

But Anthony retained a maternal or sisterly affection for the younger Dickinson and kept mentioning her in interviews, as the decades passed. Anthony even volunteered to help solicit funds for Dickinson when she fell on hard times.

In a touching 1895 letter, Anthony wrote, â€śMy Darling Annaâ€¦Iâ€™m awfully glad to know you still liveâ€¦[no one] ever has or ever will fill the niche in my heart that you didâ€“my dear.â€ť

The theme of wistful reminiscence characterizes another striking comment Susan B. Anthony made later in life when discussing her lesbian niece, Lucy Anthony. Lucyâ€™s life-partner was the brilliant orator and activist Rev. Anna Howard Shaw, who eventually took over the presidency of the suffrage movement and expanded public support for it.

Susan wrote, â€ťI wanted what I feared I shouldnâ€™t find, that is a young woman who would be to meâ€“every wayâ€“what she [Lucy] is to the Rev. Anna Shaw.â€ť Clearly, Susan B. Anthony was happy for her queer-blended extended family.

It was â€śniece-in-lawâ€ť Shaw who was Susan Anthonyâ€™s appointed spiritual heir, in one of the most moving and significant deathbed vigils of American â€śherstory.â€ť Anthony drifted in and out of consciousness as the end drew near. Shaw tried her best to comfort the dying activist with a solemn promise to do everything in her power to get the vote. The scene was an emotional â€ślast-ritesâ€ť passing of the suffrage leadership torch, from one lesbian to another.

Anthonyâ€™s only regret was that she hadnâ€™t been able to sustain an enduring lesbian union like that of Lucy Anthony and Shaw. The two life-partners created homes together and lived together and were devoted to one another till Shawâ€™s death in 1919, as the country stood on the cusp of national woman suffrage. Anna Shaw kept her promise.

Anthony did develop a passionate queer relationship, however, in her last years with Emily Gross, a married woman who lived in Chicago. They visited each other and traveled together. Anthony referred to Gross as her â€ślover.â€ť

Why have most historians straightwashed Anthony? Why has popular culture not fully acknowledged theÂ de factoÂ queer-straight alliance of women who worked in â€śopen secrecyâ€ť in the gender revolution that was the suffrage movement?

My husband and I visited Anthonyâ€™s house in Rochester, New York, last summer. I vigorously protested the dreary straightwashed tour of her life being presented, but was made to feel like a troublemaking queer in Anthonyâ€™s own home for challenging the guide and asking questions.

â€śWhat difference does that make?!,â€ť the tour guide snapped as she told me that the feminist icon was straight. I persevered and attempted to talk to the staff members who were there, all of whom seemed resistant and condescending. We left disheartened and triggered to recall sad memories of our own â€śclosetedâ€ť educations.

I later had a long phone conversation with the president of the museum. She reached out to me after the unfortunate incident and seemed sympathetic.

She patiently listened and said she wanted to hear everything I had to say, restoring my hope that the museum might evolve to forthrightly embrace the many queer figures of Anthonyâ€™s coterie.

Itâ€™s troubling that our cultural institutions donâ€™t do enough to take the initiative without being prodded to educate their staff to present queer history willingly and to respond without bigotry to questions about it. The â€śstraight-supremacist flinchâ€ť is a homophobic kneejerk reaction that needs to be discarded.

Where are the scholars and documentarians who will tell the truth and convey it compellingly to a mass audience? Why do some modern academics continue to render lesbians invisible and refuse to use the word lesbian to describe women of earlier eras, not realizing how absurd these ivory-tower practices are?

If lesbians and gays are defined as predominantly romantically attracted to their own sex, then theyâ€™ve existed in various cultural settings throughout history and Anthony was obviously a lesbian.

If I had learned the truth about the many magnificent contributions of queer folks like Anthony, Dickinson and Shaw, to US history â€“ if I had known that LGBTQ history is an integral part of global history â€“ my childhood would have been different.

If we collectively continue to erase Anthonyâ€™s queerness and only vaguely say things like â€śshe never married a man,â€ť then what weâ€™ll continue to churn out is the same old dishonest straight-supremacist crap. History â€“ what people did and how theyâ€™re remembered â€“ is power. And LGBTQ people have had the power of history taken from them for far too long.

Celebrate Susan B. Anthony as the queer, multi-dimensional, intersectional equality goddess she was. She worked with other progressives to sow and fertilize the seeds of a national and global gender revolution. She wanted queer and straight women to have the unfettered liberty to develop their own genuine ways of being and to make their own choices.

Her big-hearted dreams of a more inclusive world and a world free of voter suppression of any kind still beckon to us today.