As we celebrate the 25th anniversary of Northampton Pride and the 2nd anniversary of the legal recognition of same sex marriage in Massachusetts this year, history has been at the forefront of my mind. Several thousand same sex couples have married in Massachusetts over the past two years, and life is only better for the people of the Commonwealth as a result - better for ALL people!Â  Yet, a new fight began this past year to place the issue of same sex marriage on the ballot.Â 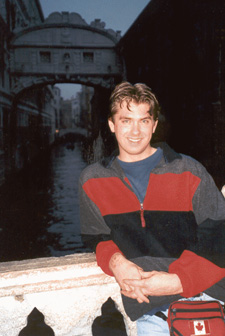 Note: The son of two Lutheran pastors, Vaughn Roste is a Canadian who has worshipped and worked in Episcopalian, Presbyterian, United and Christian Reformed Churches, but his current employment is teaching at a United Methodist College. He has visited five continents and lived on four of them, holds three degrees in two different areas (theology and music), and has written one book: "The Xenophobe's Guide to the Canadians," available at Amazon.com.

We've heard a lot about "biblical marriage" lately, largely as a defensive reaction against same-sex marriage. I read one letter to the editor written by a Lutheran pastor that claimed that "the Bible clearly teaches that marriage is the God-ordained covenantal union of one man to one woman." How very applicable to the contemporary situation, I thought. If the Bible really teaches that (and in such modern language too!), then we all should be paying the Bible a lot more heed.

So I picked up my Bible and looked up all the passages that have anything to do with marriage (I had help: I used a concordance). I examined the scriptural use of all the words I could think of related to marriage: marriage, marriages, marry, marries, married, wedding, weddings, wed, husband, husbands, wife, and wives.

Note: This is an in-depth article based on the Contra Sola Scriptura principle as it relates to Lutherans. For an easier read by the same author covering the same basic points for a general audience, please go to Biblical Marriage: A Bad Source For Debate

I have recently read several comments made by Alberta pastors that Scripture alone should be used in determining Lutheran church policy. Pr. Brad Everett in the last issue of The Forum referred to the ELCIC Constitution which states (in part) " . . . the Old and New Testament . . . [are] the only source of the Church's doctrine . . ." Pr. Mike Wellunscheg makes the same point in his letter to the editor in the November 2003 issue of the Canada Lutheran: ". . . we are Lutheran and adhere to the Reformation principle of sola scriptura." When one side in a debate clearly aligns itself with Scripture it forces any opposing opinion into the uncomfortable position of having to argue against the Bible, which is difficult as the Bible is a document that we all tend to hold very dear.

There are about half a dozen direct references to what we today term homosexuality in the Tanach and NT, and a few others which are relevant but not direct. Two of the most negative passages are found in the book of Leviticus, alongside a mass of ancient Jewish food and incest taboos, purification rituals and medical protocols. In the New Testament, there are several instances in the Epistles where Paul disparages homosexuality. Notably, at no point in the Gospel narrative does Jesus condemn homosexuality.

Read moreGay Marriage In The Bible

We have been told that the Bible defines marriage as between one man and one woman. Therefore any other kind of marriage is wrong, including same sex marriages. However, is that what the Bible really says? Is the Bible open to more than one type of marriage? If so, how many types of marriage might it recognize?

To start with, let's recognize that nowhere does the Bible define marriage as between one man and one woman exclusively. As a matter of fact, the Bible mentions eight different types of marriage that are recognized and approved by God. They are:

Read moreWhat Is A Biblical Marriage? (by Brother Lawrence Damien)

The Presidential Prayer Team is currently urging us to: "Pray for the President as he seeks wisdom on how to legally codify the definition of marriage. Pray that it will be according to Biblical principles. With many forces insisting on variant definitions of marriage, pray that God's Word and His standards will be honored by our government."

Any good religious person believes prayer should be balanced by action. So here, in support of the Prayer Team's admirable goals, is a proposed Constitutional Amendment codifying marriage entirely on biblical principles:

"The church is not of one mind. I expect this issue to continue to be raised until society comes to terms with it." ~ Bishop Elias Galvan of Seattle, March 21, 2004 (speaking after Methodist minister Rev. Karen Dammann was acquitted in a church trial over her sexual orientation.)

As recently as March, a CBS poll found that religion is a factor in people's views of same-sex marriage: "Three in four people who say religion is extremely important in their lives would favor a constitutional amendment prohibiting same-sex marriage, and three in five think there should be no legal recognition of same-sex relationships." And a Pew Research Center survey released in November, 2003, concluded that a person's religious beliefs are a "major factor" in determining how one feels about sexual minorities: "highly religious people are much more likely to hold negative views."